What is chinese potato flour

Potato starch is made from potatoes, including skins cooked, dried, and finely grated. So how much do you know about potato flour?

What is potato flour?

Potato flour is made from potatoes, including skins, which are boiled, dried, and finely grated. It can be used as a thickening agent, and although not as thick as white flour, it retains moisture in some baked goods.

The production process of potato starch is the same as that of fresh sweet potato, but industrial production of potato starch is simpler than manual production. It is mainly organized by washing, grinding, sieving, protein separation, washing, dehydration, and drying raw materials. The main difference between traditional and modern production methods is that the latter uses disc centrifuges or hydrocyclones instead of flow cells to separate impurities, enabling operations to be automated and continuous for larger-scale production. The nutritional value of potatoes:

1. The first choice for meat products

After adding starch to minced meat products, it has obvious effects on improving the water retention and the tissue state of the products. The gelatinization of starch causes this process during heating. Fresh meat contains 72%-80% moisture, and most of the solid matter is protein. When the meat product is heated, the protein is denatured to promote the binding capacity of water, and the starch can absorb this part of the water, gelatinize and form a stable structure. Compared with other starches, potato-modified starch has a lower gelatinization temperature. The product's protein modification and starch gelatinization functions are almost simultaneously performed, and small "water sugar" will not be formed inside.

Potato-modified starch has a high degree of expansion and a strong water absorption capacity. During the heating process, the meat protein is denatured by heat to form a network structure. Because there is still a part of the water in the mesh that is not tightly bound, it is absorbed and fixed by the starch granules. The starch granules become soft and elastic and play the dual role of adhesion and water retention. The meat products added with potato-modified starch have a uniform and fine organization, compact structure, elasticity, smooth cut surface, fresh and palatable, and strong water retention during long-term storage and low-temperature refrigeration.

Modified starch, as an excellent thickening agent, is widely used in sauces, and the use of modified starch can reduce production costs; at the same time, due to the stable quality of sauces, it can be stored for a long time without stratification, which makes the appearance of the product good. Lustrous and delicate taste.

Sauce products mostly contain high salt content, so the PH value changes greatly. They generally need to be sterilized at high temperatures and accompanied by moderate to vigorous stirring or homogenization; because of the organizational state, acidity, emulsification effect of various sauces, etc. The requirements are different, and the selection and use of modified starch are significant.

Potato denatured credits have low gelatinization temperature, which can reduce the loss of nutrition and flavor caused by high temperature; mild odor, which will not soar the original taste of the product; high transparency, which can give the sauce a good appearance; the screened small particle products can provide a Very smooth surface. At the same time, potato-modified starch has good anti-aging, anti-shear, anti-high temperature, and low PH values, which can effectively prevent the coagulation and dehydration of sauce products and can increase the emulsification effect to a certain extent. In sauce products, potato-modified starch can not only be used as a thickener but also provide a specific texture and taste to the product. Particular potato-modified starch can also be used to improve soy sauce's rheology and enhance the sauce's adhesion and wall-hanging feel. 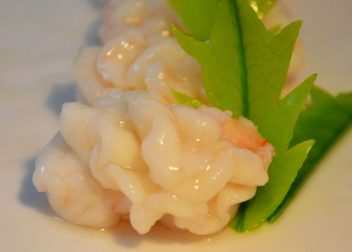